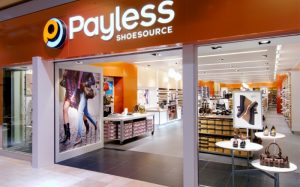 This isn’t a story from the rejected piles of Terminator franchise spinoffs; this is a reality.

The Pozez’ conception that grew into Payless ShoeSource brick and mortar stores across the U.S. and Canada are officially shuttering.

Established by the Pozez cousins in 1956, Payless became a public company in 1961, eventually merging with The May Department Stores Company in 1979.

As recently as 2017 the company had acquired the Stride Rite Corporation, a well-known shoe manufacturer specializing in brands such as Keds, Hush Puppies, Saucony and Merrell.

There were an estimated 4,500 Payless stores globally at the height of their success.

Annual sales for 2011 was reportedly upwards of $3.4 billion.

How the laces unraveled

The story of Payless’ demise is not unique.

Missing the boat on the online market was just one component of their downfall.

Drowning in debt, they first filed for bankruptcy in 2017.

They emerged with a reduced store footprint and a plan to pay back approximately $400 million in outstanding loans, down from an estimated $800 million prior to bankruptcy filing.

The company made deep cuts to management that were never re-filled. Those decisions eventually hindered the re-launch of their e-commerce site.

This would prove to be final nail in the retail coffin.

On February 14, 2019 Payless announced they were yet again filing for bankruptcy.

The 790 remaining stores in Latin America and other international locations are unaffected by the most recent announcement.

Will they be missed?

I can’t say as a consumer I’m highly disturbed by this recent announcement. I was not part of the Payless target audience.

I figured out a few years ago that you pay for what you get; and Payless shoes were often inferior and not worth it.

However, I was astonished to discover about six months ago that they didn’t facilitate online sales.

A visit to their website categorizes and lists their products, but instead of offering a buy option you’re directed to find a store nearby.

It wasn’t too long after my online search that I heard of a store closing in a market that would absolutely be in their wheelhouse.

I guess you could say, there were signs.