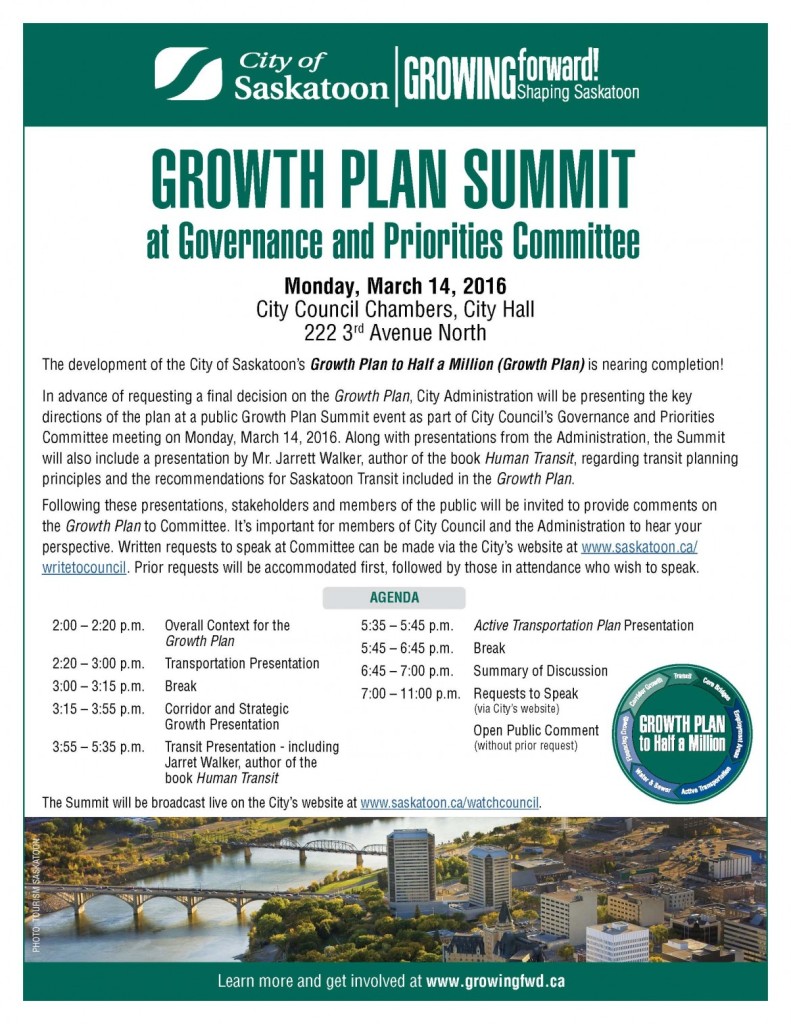 Administration at the City of Saskatoon are rolling out the final stages of their highly publicized growth plan during a public summit this upcoming Monday. But is it ready to execute?

Growth to Half a Million (Growth Plan)

The objective of the plan is to help create a plan for future infrastructure and land use. Elements of the plan include improving transit, building bridges, expanding existing corridors, identifying employment areas and financing projects.

The plan itemizes objectives the City believes we need to implement within the next five to ten years in order to effectively handle increased population. According to the City, the municipality is anticipating growth between two to two a half per cent each year.

To be successful in a sustained growth, City Hall is exploring what role the private sector will play in development. From our point of view in the commercial real estate market, there is opportunity to partner between public and private but City administration has to make it attractive or it simply won’t happen.

What is in for private developers to build public infrastructure?

A recent topic of discussion regarding development for Parcel Y on River Landing is a five year tax abatement. According to Alan Wallace, Director of Planning and Development, the city has never entertained such an incentive.

Some City Councilors don’t believe the access to public areas, developed with private funds, is sufficient to warrant the tax break. Fair enough, however, no developer is going to the expense of developing public areas out of the generosity of their hearts.

I believe denying a tax abatement will only result in this project taking even longer to get on its feet, if at all. Residents have been waiting years for something to happen on this site.

The councilors cite an unknown tax loss with concern regarding abating the property taxes; how about we calculate what they lose every year the site sits undeveloped?

An element of the growth plan includes parking needs in the downtown. I was able to attend an open house this week on just this component and while there are some good ideas being floated around by the City, they are still missing the mark.

The City is suggesting, as one strategy, to change zoning to force downtown developers to build public parking into their plans. Here is why this initial change could be flawed.

All new developments in the core in the past five years have built on site parking to accommodate their building needs. Understandably, they are only going to the expense of constructing what they need to make the project viable.

Underground and multi-level parkades are incredibly expensive to build. The City however is offering no compensation for why a developer would build more than they need for their tenants.

A solution I believe would work could be for the City to commit to purchasing a portion of a parking garage, for example, for public access. This type of incentive would mean developers put in less of their own capital to start but the City would also save a tremendous amount of headache on their end by not having to design or manage the build.

Taxpayers are unlikely to support the City constructing parkades on their own, but they could possibly get on board with this type of partnership.

What else do you got?

The City still has some work to do outlining what they will do to entice developers into the core. As a few councilors suggested recently, a policy for providing financial aid to support privately funded public areas may be in order.

What other incentives do you think the City could bring forward to bring development into the downtown?