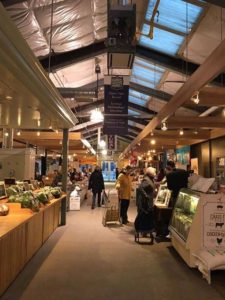 The City of Saskatoon has officially put out a tender to lease the Farmers’ Market building in Riversdale.

At current, the facility is leased to and operated by the Saskatoon Farmers’ Market Co-operative Ltd.

In their original agreement to lease the property, they outlined their plans to expand the market hours over time.

That vision has only grown to three advertised full market days. The City is ready to let someone else take a run at it.

The current lease operates wholly outside of what we would typically see in a standard commercial lease.

The 13,561 square foot facility is leased at a mere $10 per year for the entire property with the tenancy effectively only picking up operating costs which include utilities, maintenance, property taxes and insurance.

As the sole tenant, the Farmers’ Market Co-op charges vendors a fee to occupy a retail space within the building.

During original lease negotiations the Farmers’ Market Co-op was tasked with “animating” the public building with expanded uses outside of the traditional market.

They have dabbled in renting out the facility for special events when not in operation for the market and hosting groups that align with their vendors.

In addition to not being able to find alternative uses, current president Farmer’s Market Co-op Adithya Ramachandran claims there is not enough interest from vendors to operate increased hours.

Ramachandran said they were blindsided when notified the City seeking proposals for another tenancy.

The City had a number of speakers register to stand before Council, with the majority vocalizing to keep things the way they are.

Not everyone is agreement that the status quo is working, however.

Farmers’ Market Co-op past president Barb Stefanyshn-Cote said the complete opposite when she spoke to council.

Stefanyshn-Cote stated she resigned from her position a year and a half ago after her efforts in increasing activity were shunned.

The Request for Proposals (RFP) was issued October 31st. Deadline for submission is December 14.

The RFP states that the City is seeking another farmers’ market model that would operate six to seven days a week.

Council has weighted the RFP to be rated in three areas: experience (30 per cent), business plan (30 per cent) and approach (40 per cent).

Experience is pretty self-explanatory and does require the disclosure of the potential owners, members or investors.

The business plan will be judged on its creativity, innovation and feasibility.

Approach holds the most weight and relies heavily on someone finding a way to better utilize the building, while keeping with a commitment to Saskatchewan food and products.

City Council will require what I consider to be extensive reporting from any tenant they contract.

Reports due quarterly and annually seem to focus on how many days the market is open versus the number of patrons, in addition to reporting revenue.

A tenant will also be required to track how far farmers are coming from and whether that supports a 100 mile food radius.

The Farmers’ Market Co-op is not entirely discouraged by the process, however, and they have stated they will be submitting a proposal against other submissions regardless.

The new lease will take effect this spring.

Give the people what they want

I myself am not a frequent user of the market so I ask: have you been to the Farmers’ Market recently?

Would you support a model that was open every day?

Let me go out on a limb here and submit another idea.

What if the farmer’s market was allocated a reduced portion and the remaining space was used for something else entirely?

This is a public facility and therefore we all get a say in what it could be.

Maybe the vision of the farmers’ market needs to be tweaked in a way that it can be sustainable but operates with a model that provides more frequent hours.

What do you think?