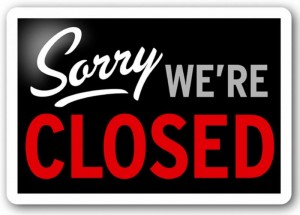 We said hello to many new restaurants and retailers in 2014 but we also had to say goodbye to a few in Saskatoon. A recent article about Toronto landmark real estate that has been closed or demolished, inspired me to think of the properties or businesses that gave way to growth and change taking place in our Saskatoon market in 2014.

The kitchen is closed

Saskaboom was still in full force at the beginning of 2014. New restaurants were cropping up all over Saskatoon. A turnover in the food and beverage industry is to be expected in any market, however.

East Side Marios shut its doors in the fall of 2014. With its high profile location and standalone site, it is expected the vacancy will be filled soon by another restaurant in the Cara food chain. Other Cara brands include Swiss Chalet, Milestones Bar Grill, Montana’s Cookhouse, Kelsey’s, Harvey’s, Casey’s Bier Markt, Prime Pubs and Fionn MacCools.

It was reported that the west side eatery Mel’s Café was closing their after 14 years also this past fall. With very little inventory in restaurant zoned property, it is not surprising that the space was quickly turned into another food option. The new Vietnamese owners are now operating as Ling’s Café.

Jake’s on 21st was a favourite haunt of mine for fresh sammies and pita chips. They have closed their doors to the everyday lunch crowd as of the end of 2014 and will be focusing solely on catering from here on in.

Retailers continued to expand and contract in 2014. A few local casualties included locals such as Laundry (ladies wear with locations both downtown and at the Centre at Circle and 8th mall) as well as home and décor store The Primtree, located on 8th Street.

Speaking of 8th Street, grocery stores were the story of the year for the biggest changes on Saskatoon’s Golden Retail Mile. With the Safeway/Sobeys merger of 2013, there were a few switches amongst the grocery crowd.

The Safeway lease at Cumberland was left to expire and the building demolished just before Christmas, as the property owner has plans to redevelop the site. Further down the street, Saskatoon Coop closed their Greystone location in favour of moving into Safeway’s anchor at Circle and 8th. The Sobeys at Cumberland remains and there is no one yet to backfill the Greystone Coop vacancy though their gas bar lives on there.

Local retailer Uncle Ed’s Furniture announced early in 2014 that they were closing their doors after 40 years. The owners accepted an offer on the real estate and took an early retirement. The space has since morphed into Sorensen’s Fine Furniture.

What does the future hold?

With Saskatoon’s current retail vacancy rate hovering around 3.14 per cent, competition is still fierce to find good, highly exposed, retail product. The average rental rate continues to climb, from a reported $25 per square in 2012, to $26 per square foot in 2013. ICR is reporting a $26.75 per square foot average for the end of 2014.

The inventory of retail space has risen to an estimated 10.8 million square feet, with positive absorption of approximately 138,870 square feet this past year.

I predict there are many new brands that have yet to make their entry into our market and we expect to see them emerge in 2015. I may have missed a few of the businesses that won’t be continuing on, however, so please do share with me any you will feel will be missed.