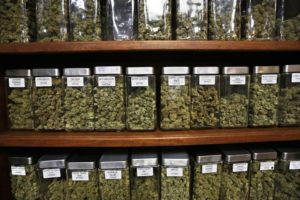 We have been receiving a wave of phone calls from potential tenants looking to cash in on the upcoming legalized marijuana trade.

They are fervently shopping for locations which I feel like may be premature.

Is the province really prepared for this? I’m not sure any part of Canada is.

The national legislation has not been passed and pot shops are popping up everywhere.

No one’s saying it but I can only presume the proximity in time to legalization is what is stopping police from taking action.

As a commercial real estate agent, I’ve been cautious and have advised landlords the same.

Contracting leases with tenants without existing licences, with no guarantee they’ll get one, is risky.

A lease is a legal contract between two parties; there are clauses to protect what if’s and maybe’s but they are not typically set up to be broken.

It will be hard for tenants that are already set up in spaces to close up shop if they’ve been denied permits.

This scenario could put tenants in a hard spot and landlords in an even tougher position.

The province received a total of 1,502 applications for licences across Saskatchewan. There are only 51 permits available.

And even if your application makes it through the vetting process, a lottery ultimately decides the winners.

Saskatoon will be potentially awarded seven retailer permits while Regina will only receive six permits.

In my little hometown of 2,500 people, there were 21 applicants for one permit. I’m not certain Unity can even justify one, but prove me wrong!

StatsCan is also reporting that Saskatchewan has the lowest rate of marijuana use of the provinces.

They added the price of weed has fallen in recent years as well.

None of this bodes well for a robust retail outlook.

Pot and a pint?

Logically it appears they would need separate retail locations from their existing bars.

It’s not a stretch, however, to think that a bar operator may be the most prepared to follow SLGA protocol when it comes to cannabis retail.

The whole process is further complicated by the fact that if pot permits are anything like liquor permits, SLGA will require a location in place before they can provide approval.

It presents a unique dilemma: what comes first, the chicken or the egg?