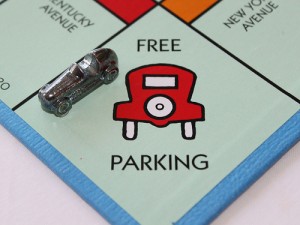 Much like Monopoly, it is especially satisfying when you hit the holy grail: “free parking” in downtown Saskatoon and Regina. It is not easy to find in most large urban centres. Recent statistics released by ICR Commercial Real Estate prove the demand is not slowing down.

Though rates remained relatively stable in the Saskatoon downtown core, rising only 3 per cent over 2014, Regina was not so lucky. Parking rates in Regina’s downtown rose 7.4 per cent over last year.

ICR attributes the rate increase in Saskatoon to be less about rising prices and more about previously cheaper lots simply catching up to market rates.

Hourly and daily rates were constant over last year. On average, the hourly rate is $2 and a majority of daily lots charge a maximum of $10 per day.

Rates in Regina were similar to its neighbor north, with surface stalls starting around $75 per month to a maximum of $225 per month with an average of $155 per month. Underground stalls were relatively close with the minimum rate starting at $205 per month and the maximum capping off at $300, which averages $270 per month.

Monthly rates jumped from $5 to $20 in some downtown lots this past year. That translates to an extra $60 to $240 per year in parking for some drivers.

Daily rates in Regina stayed consistent from 2014. Hourly rates averaged out to $2 with most daily lots charging $10.

Saskatoon and Regina are both facing similar challenges with demand heavily outstripping supply.  Continued population growth in both communities will not ease the situation any time soon.

The City of Saskatoon’s response to parking this year was to install dedicated bike lanes downtown. Just in the initial phase, this project is not expected to be fully functional until next summer.

It will be interesting to see if either city comes up with a long term solution.  Options could include a superior transit experience or constructing more parkades. What do you think the answer is?