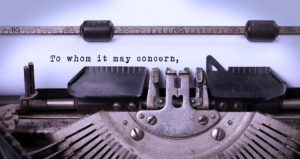 I am a commercial real estate agent in Saskatoon. I’ve dealt with your companies on behalf of landlords and owners over the years.

Commercial hookups are different than residential services in that commercial clients will often require a number of people to be authorized to deal with the account.

This isn’t a new issue, I’m sure you’ve been dealing with it for years.

And with tightening of security measures, I can appreciate that you need to cover yourselves over fraudulent access into these accounts.

But let’s come up with a better system than asking to speak to the owner of the building or the last person authorized on the account.

I’ll go ahead and make an assumption that you cannot authenticate the sound of an owner’s voice against someone who may be impersonating them. So why are you asking?

I won’t shame you by pointing out who has the better practices in confirming identity. Let’s just say you’ve all dropped the ball with me over the years.

Starting out , I always take the straight forward approach by immediately identifying who I am, who I work for and why I’m calling.

All of which are verifiable facts based on my profession and company website.

Recently, I was asked twice to put the owner of the property on the line as I wasn’t authorized to cancel a service on a sold property.

On one of those calls, the owner simply picked up the phone and said hi; in the other instance, you did ask him to rattle off his birthday and his driver’s licence.

I think it’s safe to say a stolen wallet would have contained both of those items of information.

How you consider this to be a sure-fire way to detect identity theft is beyond me.

I won’t disclose which of you three didn’t bother with authorization at all. I had account numbers on all three, including yours, so I guess you believed my legitimacy.

This is a task that many people in administrative positions are given. You would hardly expect the CEO of a company to call in to change service.

Nor will that CEO have time to call in to change or add authorizations.

Rogers, for example, understands these challenges and not only assigns an account number but also applies an access code for their commercial clients.

This code does not appear on any billing information but remains with the account for its duration.

Creating a likewise uncomplicated system could save some frustrating minutes for all us sitting on hold being told we can’t finish everyday requests.

I received a call this morning from SaskPower to discuss my concerns. Someone’s reading these things I post?!

Though happy to hear this feedback, I pointed out I’d never been offered this solution at any time when I’ve called in.

They confirmed they will be incorporating this into their training as a result of my concerns and admitted it was clearly something they were failing to advise folks.

Challenge is out to the other providers I spoke about. Do you have a similar solution that I don’t know about yet?