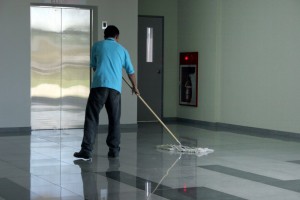 Most commercial real estate agents would agree that our tenants and buyers are less likely to show warm, fuzzy feelings about properties like a homebuyer might. Often functionality and cost win out as the primary decisions behind choosing a commercial space.

But presentation does matter to these clients and there is typically only one opportunity to wow them so why not make it count.

Websters dictionary describes spick and span as spotlessly clean; fresh, brand-new. Though there is an acceptable level of wear and tear on an existing space, I think this is an area ignored by landlords and sellers.

Broom swept is a term I use to describe my expectation of a “clean” space. Free of debris, all items removed that aren’t affixed or relative to the space, and where applicable floors broom swept.

If we have a cooperative owner who is willing to do further housekeeping I will encourage it. Washing windows, carpet cleaning, removing old signage, etc. are all items that will enhance showability of the space.

Signage is a significant factor in reaching potential tenants and buyers. We use paper signage in windows, 4’x4’ signage on tripods, as well as a variety of specialty sized signs and banners.

Keeping signage clean and visible is a goal especially on construction sites where it may need to periodically be moved around. Regular sign checks are necessary to make sure properties being presented properly.

We don’t always advise landlords to remove tenant improvements following their departure, but in some cases this can be an important step in preparing the property for a new tenancy. Improvements that aren’t usable by most occupancy can be referred to as property as functionally obsolescent.

For example, I recently had a vacancy which had been occupied by a hair salon for 20 years. The space was dated but suited for a number of uses, not just a salon.

I recommended to the landlord that the space be “shelled out.” Essentially this would entail removing all interior demising walls, floors, and suspended ceiling. Water and sewer hook ups could be capped for the same use down the road while removing the current sinks.

Even in instances where an existing layout works for a tenancy or incoming purchaser, they may have plans to further alter the space to suit their needs. By removing the functionally obsolescent layout or improvements, the space presents itself in a better light to more users.

It doesn’t matter what kind of space you are putting on the market, the first impression can make or break a deal. Have you ever been in a home or a commercial property that turned you off? What about the viewing was unappetizing to you?