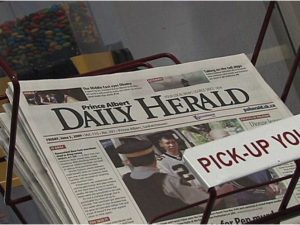 The recent closure of the Moose Jaw daily Times-Herald marks the further demise of local print media in Saskatchewan.

The trend is not unique to our province; small newspapers have been on the decline for many years.

We have greater access than ever to national and international stories.

Readers are more informed of world affairs (or should be) than ever before.

But who’s covering the local angle?

One of the most important roles of media, regardless of the size of the community it serves, is to call for accountability and force transparency.

Who will be covering the decisions of the City or Town Hall?

Will anyone be asking questions of the Rural Municipality?

The operations of school divisions, health regions, and all other forms of local public services will no longer be made public.

The lack of local sports coverage is especially saddening to these communities.

My first career as a reporter has me feeling sentimental.

I took my training at Lethbridge College and worked for a few small, rural weeklies.

What always struck me as interesting was the ownership of the readers in any community I reported in.

People felt the newspaper not only fed them news but it was a voice for their concerns as well.

Even in my short time in the industry, I saw a change from small independent publishers towards larger conglomerate media companies.

The result was often a lack of heart towards what readership really wanted.

They lost their local touch and readership declined.

I would argue that although the medium of news print seemed to decline in favour of online access, part of that came from a lack of local content.

The outpouring of love for the shuttered Moose Jaw Times-Herald is not surprising. It has a rich history.

Star News Publishing purchased the publication along with other Saskatchewan papers in 2016.

The closure not only affects local news coverage, but it puts out 25 employees who have virtually nowhere to look for like employment.

The industry as a whole is in jeopardy but I do see some communities putting up a fight for their local news.

The Prince Albert Daily Herald, one of Star Publishing’s Saskatchewan publications on the block, is no longer in limbo.

It was announced that existing staff has banded together for a buyout to maintain the publication.

This is great news for Prince Albert, which is a likewise community in size to Moose Jaw.

I will count this as a win for us newsies everywhere.

I openly delight in hearing any paper has returned to local ownership. Because it takes it back to the old roots of what they’re really about.

Bringing news to the people will never die and if local publications can find a way to hang on and evolve I think they have a fighting chance.